“Spirit Songs A Musical Taxonomy of the Amazon” is a documentary that my friends and I are making about healing songs—called icaros–and the shamans of the Peruvian Amazon who sing them. Until recently, these shamans have served for generations as the doctors, pharmacists, psychologists, and priests for the over three million indigenous people that live alongside the Amazon river in Peru.

First let me explain why these songs are so important. Shamans use the icaros to make contact with plants, animals, and other spirits and engage their help in healing people with problems as small as a cold and as large as the lingering sadness that we call depression in our country. The number of songs a shaman knows is the measure of his healing power. An elder shaman may know upwards of a 500 songs and possess the knowledge of how to use each icaro in combination with plant medicines to treat specific ailments.  Unfortunately, with the lack of apprentices interested in ancient healing traditions, many young and middle-aged shamans know less than 50 icaros and this number is lessening as accomplished healers pass away. 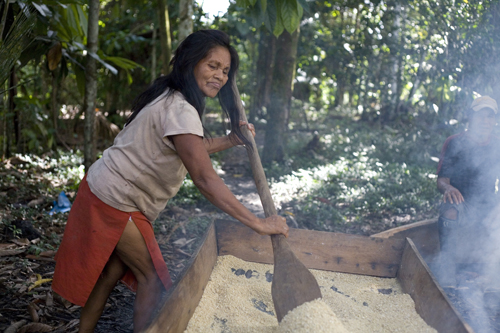 Now I can properly introduce us–a group of videographers, journalists, musicians and photographers who dedicated to documenting and preserving indigenous culture. When we first heard about the disappearing icaros, the idea for “Spirit Songs” was born.  Our film’s director, Ryan made a short research trip to the Amazon in 2006, and for the past year our team of five filmmakers has been organizing a larger filming expedition to Peru. Our goal was to record shamanic traditions as well as the construction of the Interoceanic highway, a $1.9 billion road project from the Brazilian Atlantic to the Peruvian Pacific, which comes to completion this year. Despite a tough economy, our vision took form and in March and April we traveled to the departments of Loreto and Madre de Dios, Peru visiting communities, recording songs, and filming interviews with every healer and activist we met along the way. To date we’ve shot 70 hours of footage, over 2,500 still photographs, and recorded hundreds of icaros, sung in six indigenous languages. 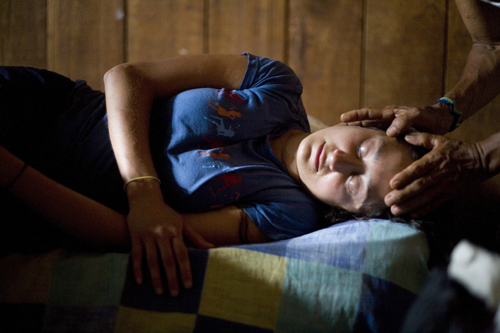 Through this footage we can begin to tell the story of the extraordinary people that live by the river. They survive through their relationship with the land, eating from fishing and subsistence farming.  Both the women and men make artesian goods from tree fibers and other foragings and are eager to trade with any outside visitors (during our stay in one town, our sound recordist, Phil, traded an extra pair of underwear for a palm fiber canvas painting—both parties felt like they got a good deal). Although there are many tribes that speak different dialects—we visited five within a few miles of travel—music is a vital part of their culture. Entire communities come together to dance in groups and honor the animal spirits, such as the anaconda and the heron.  During town parties, men, women, and children stay up all night to dance with their hands on each others shoulders, pounding the ground with sticks, and singing in powerful bursts—their voices echoing across the river banks. The jungle is honored, their spirits are raised, and us, as outsiders, are allowed to watch and start to understand the power of these songs. 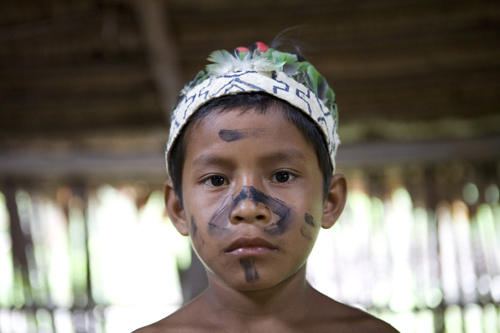 I wish I could say that we were the only ones who recognize richness in this region. Yet the reality is that there is a gold rush in the Amazon rainforest that is increasing each day. Peru’s foreign investment-hungry president Alan Garcia, has openly declared Peru to be a “Mining Country.” In response to a recent protest over changing free-trade laws with the U.S., which involved over 30,000 indigenous people, he said: “We have to understand that when there are resources like oil, gas, wood … they don’t belong to the group that had the good fortune to be born there, because that would mean that more than half of Peru’s territory belongs to a few thousand people.” Garcia and his ministries were in negotiations to grant rights to a series of a foreign oil companies, including Colombia’s Ecopetrol, so they can explore two new lots in the Loreto department in Peru, home to the Muruhuana and other groups of voluntarily isolated people (this is close to the area we filmed during our trip).  Most of the Muruhuana have specifically not been contacted due to their lack of immunities, although some bands were contacted last year by illegal logging groups and an estimated 50% were wiped out as a result.  Yet in the face of this He has also publicly said that uncontacted tribes have been “invented” by environmentalists who are opposed to oil exploitation in the Amazon. 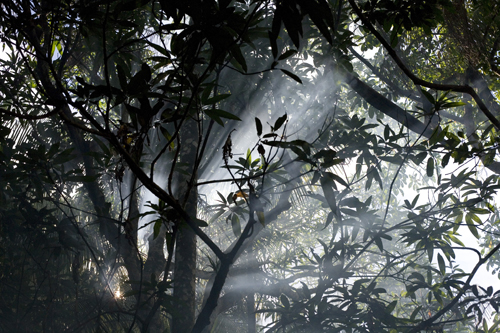 Following what has happened in the Brazilian Amazon, these outside influences in Peru will bring change very quickly. The Amazon Alliance predicts that within 5 years, 50 km of road on either side of the Inter-oceanic highway will be developed for oil production, logging, agriculture (mostly soy) and cattle lands, and within 10 years, 150-300 km will be developed. This is called the “fishbone effect” for the way that little roads will grow from a bigger road, just like a river and its tributaries. Representatives from the Amazon Conservation Team told me that Odebrecht—the Brazilian company that is constructing and will profit from the Interoceanic highway—originally pledged over $18 million for education and economic development programs for the people affected by the road.  Yet over four years later, with the road almost complete, Odebrecht has yet to fully organize these programs. 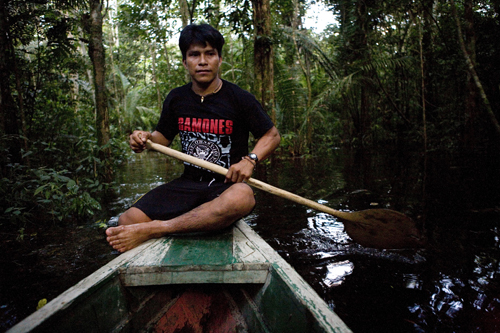 I got angry while I was doing this research prior to our trip, and expected “Spirit Songs” to become part of the fight against money-hungry influences. Personally, I was ready to tell that story. Instead we encountered the sacred medicine men and women who are keeping a steady hand in the face of so much change.  Cesar, one of the shaman we interviewed extensively for “Spirit Songs,” believes deeply in the power of the jungle to protect herself. He is a small man in his mid-50’s who has heavily creased skin that is the color of toasted almonds. His icaros are soft and sweet, and invoke God, Jesus, Mother Mary, the Indian sage Sai Baba to help the healing power of the plants. Once, before a ceremony, I asked him if he had heard the legend about the eagle and the condor. He told me he hadn’t. I explained that its prophesized that one day the eagle (symbolizing the developed world) will fly together in the sky with the condor (symbolizing indigenous knowledge) and that this will signify that healing has begun in our world. When I finished he just nodded and smiled, which he often does.  I asked him if he believed that would happen. “Claro,” he said. Of course it would.

Over the past five years, I have traveled to Peru and participated in several shamanic ceremonies to heal my mind and body. Through the help of shamans like Cesar and his icaros, I have been able to heal an eating disorder, greatly ease my struggles with anxiety, and feel an unprecedented connection to nature. I still have my moments of cynicism–especially when Cesar tells me that he had invoked the spirit of the sirena (mermaid) to foster inner beauty in my soul.  Yet returning from this trip, I wake up each morning grateful that the dark moods and irrational fears that I could fall into before prone are suddenly (miraculously?) no longer there. I feel complete in a way that I had been searching for, with a pretty consistant knowledge that love is more important than winning any fight. Simply put, I feel great and I want to talk about it with everyone I meet and recommend it to anyone I see with sad eyes, but its difficult because I still don’t completely understand how it all works. Could a few songs and a few plant medicines and a little old man really do all that?  I don’t know really. All I can say is that the more I learn about the icaros, the more I want to cover myself with them like a blanket for my journey as a human being. So the truth is that this becomes a story about me, as all of our stories essentially are. I want to save the Amazon because it’s saved me.

Telling the story of the icaros and the current state of the Amazon has taken on the shape of the river itself—powerful, often nourishing, sometimes terrifying, and far from linear. It’s easy to think about the numbers—like that the Amazon produces 20% of our oxygen and ¼-1/3 of all fresh water in the world–and feel like we have to change something fast. However, making “Spirit Songs” has shown us how much deeper this story goes than just numbers.  We learned this by taking our lead from Cesar. His finger always points past himself to the vast jungle forest around us, to the birthplace to the ancient chorus of animal and plant spirits that are so strong and so quiet that you have to find the ears to listen closely. He believes in the legend that the icaros are calling out to the defenders of the jungle. It seems that these defenders are needed now more than ever, and some days I just laugh and wonder why they wanted a group of sweaty white kids like us to come to their rescue.  But any activist knows that questioning like that takes up valuable time, and the situation in the Amazon is changing quickly.  So instead I choose to use my days to spread awareness of the icaros, and have faith that this will lead to their survival. 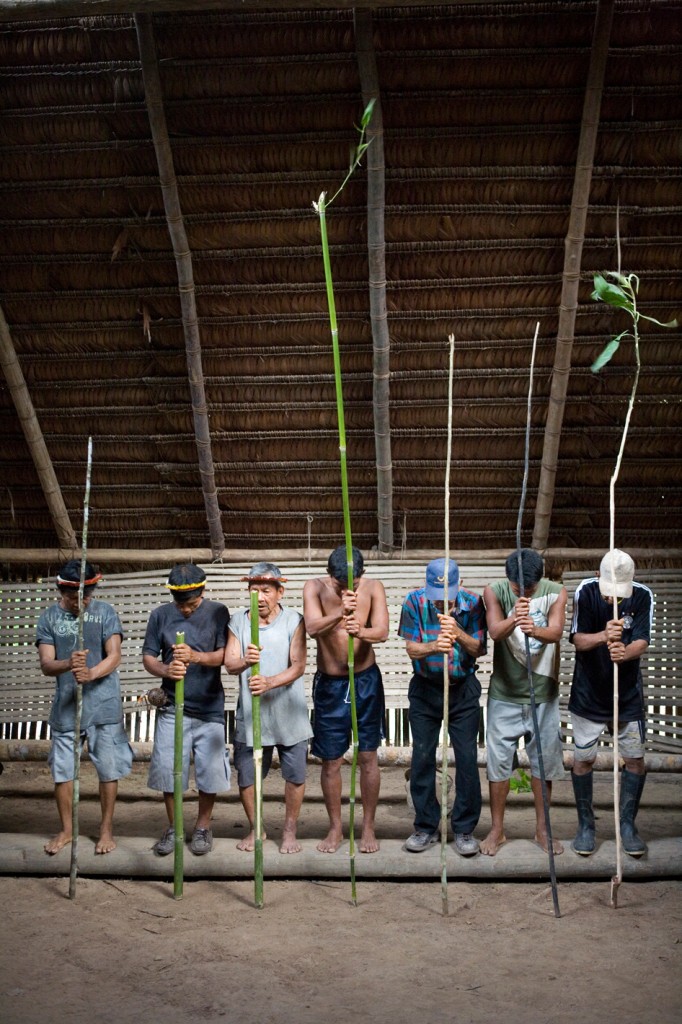 On June 7th of this year—after finishing this article–the tension between Garcia and the indigenous groups turned bloody. This year, as part of their free trade agreement with the United States, the Peruvian government passed legislation that opened up over 70% of land in the Amazon for foreign oil exploration.  When AIDESEP (Peru’s indigenous organized indigenous movement) heard about this, indigenous groups organized wide-scale protests throughout the Amazon. One particular blockade in the city of Bagua turned bloody when Peruvian police fired into the crowd, killing at least 9 protesters (that number is suspected to be much higher—many protestors are still missing and there are many reports of police burning and hiding bodies). 6/8/09 Peru Story begins at 5:20mins into broadcast

In retaliation, the indigenous groups killed 22 police officers, making it the largest act of violence in Peru since the Shining Path terriorism of the 1990’s. The conflict quickly reached the international spotlight and Amnesty International immediately began inquiring about the status of the 79 indigenous protestors that were arrested by the government. The leader of AIDESEP, Alberto Pizango fled Peru saying he feared for his life and was granted asylum in Nicaragua at the end of June.  The indigenous movement was still ready to fight when the government stepped back. The Peruvian congress voted 82 to 12 to repeal the legislation and Garcia has reorganized his entire cabinet as a result.  Although this is a solid victory for the indigenous movement, I still believe that it’s not much more than an effort from Garcia to present the façade of stable government to the rest of the world so that they can garner even more foreign investment. 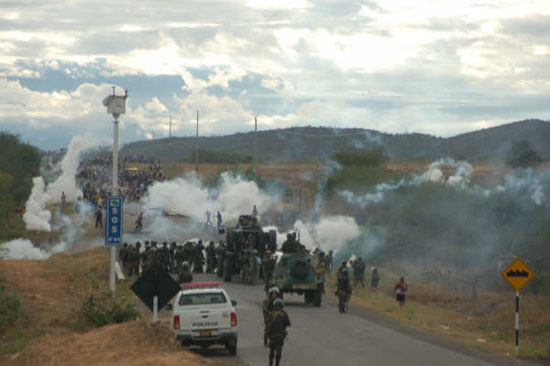