According to the documents, Wilbur Ross used a constellation of companies, some with their ownership undisclosed. The companies were set up by Appleby to retain shares in Navigator Holdings, a shipping firm with business ties to a Russian oligarch subject to American sanctions.

Ross’ stake has received more than $68 million in revenue since 2014 from Sibur, a Russian energy company co-owned by the son-in-law of Russian President Vladimir Putin.  The documents also report that Appleby has administered some 50 companies and partnerships set up in the Caymans and other tax havens that are connected to Ross, whose net worth is estimated to be more than $2 billion dollars.

“This is yet another instance of conflicts of interest within the Trump administration. Wilbur Ross influences US trade and sanctions, yet he is still making millions from a Russian company that could be targeted by these decisions. This is highly problematic for an administration at the center of investigations into collusion with the Russian state,” said Mark Hays, Anti Money Laundering Campaign Leader at Global Witness.

The deals outlined in the Paradise Papers underscore the importance of transparency measures, such as Beneficial Ownership Transparency legislation [S. 1454, S. 1717, and H.R. 3089] , which would help prevent public officials and companies involved in potentially criminal or corrupt activities from using the offshore system to hide their dealings behind a veil of secrecy.

“This new leak demonstrates once again how it’s all too easy to use anonymous companies to game the system,” said Hays.

Experts from Global Witness, an internationally recognized organization for bold, tenacious campaigns to expose and break links between natural resources, conflict and corruption, are available for comment or interview by emailing Andy Stepanian at andy@sparrowmedia.net and can provide insight in the following areas:

Stand With Reality, a nonprofit, nonpartisan coalition of concerned individuals, is launching a campaign today to defend N.S.A. contractor Ms. Reality Leigh Winner against an overzealous prosecution by the U.S. Department of Justice.
Winner has been charged under the Espionage Act, a 100-year-old statute originally designed for spies and saboteurs, for allegedly giving a document vital to the public’s understanding of potential Russian interference in U.S. election systems to a news organization.
Stand With Reality believes the charge against Winner is grossly disproportionate to her alleged offense, and is designed to create a chilling effect on investigative journalism by dissuading sources from sharing information that is critical to the public interest. The group is dedicated to raising public awareness of Winner’s case, as well as the U.S. government’s persistent abuse of the Espionage Act to silence its critics and stifle journalism.
“The document Winner is alleged to have given The Intercept is vital for understanding how U.S. election systems are seriously vulnerable to hacking. It is absurd that the government is charging her under the draconian Espionage Act rather than helping states fix our country’s election security,” said Jeff Paterson, Courage to Resist project director and co-founder of Stand With Reality.
The organization aims to fully fund Winner’s legal defense team headed by attorney Titus Nichols, of the Augusta, Georgia law firm of Bell & Brigham. Stand with Reality launched a crowdfunding campaign today to cover both legal fees and public awareness efforts. “It is refreshing to know that so many people that Ms. Winner has never known have come together to offer their support and prayers for her,” notes Nichols. “Your pledge of additional support, for fees related to her case, is commendable,” he adds.
“The new Stand with Reality group means the world to me. Not only are they going to be raising money for my daughter’s legal defense, they’ll also be raising awareness. Reality won’t be forgotten, and she’ll have a whole organization behind her,” said Winner’s mother, Billie Winner-Davis, of Kingsville, Texas. The Winner Family will be closing their GoFundMe effort and directing supporters to the new Reality Winner Defense Fund hosted by Courage to Resist in collaboration with Stand with Reality. Meanwhile, the UK-based Courage Foundation is undertaking fundraising and support efforts on behalf of Winner throughout Europe.
First Look Media’s Press Freedom Defense Fund provided a grant of $50,000 which will act as a matching fund for the first $50,000 raised for this campaign between now and August 30th. First Look is the publisher of The Intercept, which published its story based on a document allegedly provided by Winner after receiving it anonymously. The Fund is committed to supporting legal fights where key principles of press freedom are at stake, including the defense of journalistic sources like Winner facing this Espionage Act charge.
Winner, 25, is an Air Force veteran and recipient of the Air Force Commendation Medal for those who have “distinguished themselves by meritorious achievement and service.” She is universally described by friends and family as a “patriot”.
She is currently being denied bail on the basis that she is a flight risk, despite assurances from her family, and their offer of their 20-acre Southern Texas ranch as collateral.
“We believe the prosecution is trying to demoralize Reality and her family by denying her bail,” said Rainey Reitman, open Internet advocate and co-founder of Stand with Reality. “They’re punishing her with months in jail, and denying her the opportunity to fully participate in her defense preparations, all before a jury hears the merits of the government’s case.”
Stand with Reality was founded by three individuals dedicated to open government, free expression, civil liberties, and the rule of law:

END_OF_DOCUMENT_TOKEN_TO_BE_REPLACED

New York, NY — The indictment of NSA contractor Reality Leigh Winner may be the opening salvo in the Trump Administration’s self-described war on leaks. Reality is facing a serious charge under the Espionage Act for allegedly sharing an NSA report on Russian attempts to compromise the 2016 US Presidential election.  Concerned New Yorkers and political activists will show their support for Reality on Wednesday afternoon by gathering on the south steps of New York’s Union Square to declare they #StandWithReality

What: Vigil in support of Reality Leigh Winner, typographic placards will spell out #STANDWITHREALITY

Who: Concerned New Yorkers in support of Reality Winner hosted by People for Bernie Sanders, Courage Foundation, Democrats.com, and The Sparrow Project

Why: On June 5th, 2017, the US Department of Justice (DOJ) announced the arrest of 25-year-old Reality Leigh Winner, a federal contractor in Augusta, Georgia (USA), on charges of allegedly sharing an NSA report on Russian military intelligence’s hacking efforts during the final days of the  2016 election with a news outlet.  Reality Winner deserves widespread support as she faces an administration that has openly declared war on journalists and their sources.

President Trump’s May 9, 2017 letter firing now-former FBI Director James Comey in part reads, “I greatly appreciate you informing me, on three separate occasions, that I am not under investigation[.]”

However, a recent court filing by the Department of Justice on behalf of the FBI in an ongoing FOIA lawsuit plainly indicates the FBI has an active investigation pertaining to Donald Trump’s actions related to actual or potential election-related hacking and espionage by Russia. 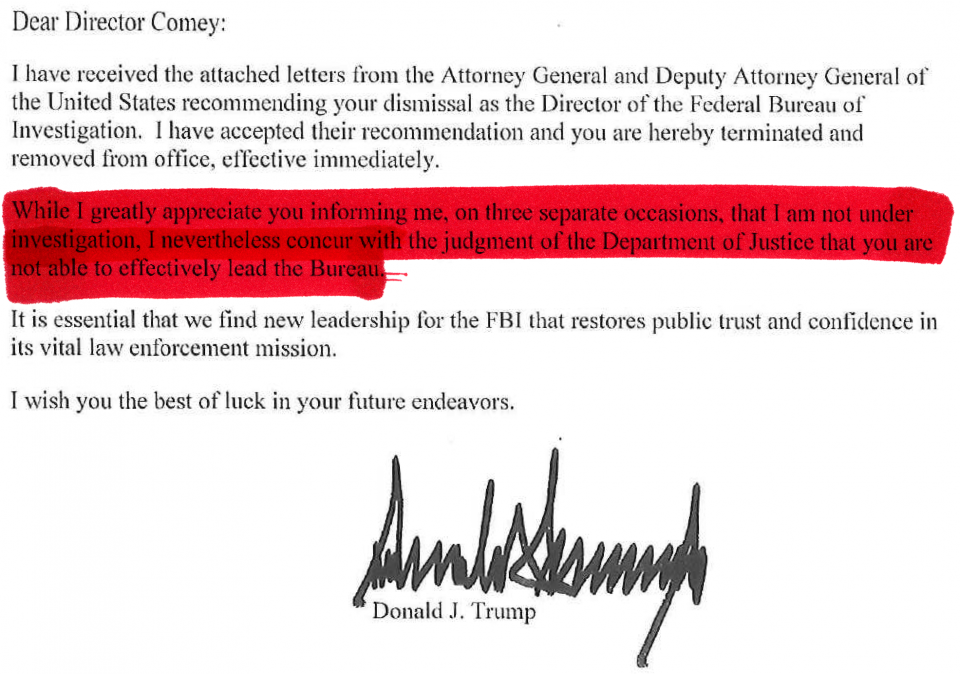 On August 18, 2016, Shapiro and Leopold submitted a FOIA request to the FBI seeking “disclosure of any and all records, including investigative records, mentioning or referring to Donald J. Trump’s statement on 27 July, 2016 [regarding Secretary Hillary Clinton’s State Department emails], ‘Russia, if you’re listening, I hope you’re able to find the 30,000 emails that are missing,’ and ‘I think you will probably be rewarded mightily by our press.’”

When the FBI did not respond in a timely manner to the FOIA request, Shapiro and Leopold sued. During the lawsuit, the FBI initially asserted that it could neither confirm nor deny the existence of documents responsive to this FOIA request.

Excerpt from the Joint Status Report that indicates that there is an active FBI investigation.  Read the full status report HERE

However, the FBI subsequently withdrew this position and agreed to search for the requested documents. Again, the documents requested by Shapiro and Leopold are records, including investigative records, mentioning or referring to a public statement made personally by Donald J. Trump, not his advisors, surrogates, or campaign staff.

Excerpt from the Joint Status Report that indicates that there is an active FBI investigation. Read the full status report HERE

In a court filing in this case on April 6, 2017, a Justice Department attorney representing the FBI informed the Court that there is an “active, ongoing investigation” pertaining to this matter and claimed that disclosing the “records that are responsive to the Russia Request” could reasonably be expected to interfere with “enforcement proceedings.” (As noted elsewhere in the DOJ/FBI’s new filing, the term “Russia Request” refers explicitly to Shapiro and Leopold’s FOIA request quoted above.) The DOJ/FBI’s new court filing acknowledges the existence of records responsive to Shapiro and Leopold’s “Russia Request”, and claimed that all, or virtually all, of these documents cannot be released because of the potential to interfere with active law enforcement proceedings.

On April 7, 2017, the Court set a deadline of July 25, 2017 for the FBI to file a motion explaining the basis for its claim that release of documents responsive to “the Russia Request” would interfere with an ongoing law enforcement operation.

The lawsuit is Case 1:16-cv-01827-KBJ. It is being heard in the United States District Court for the District of Columbia.

Ryan Shapiro, referred to by Politico as “a FOIA guru at the Massachusetts Institute of Technology”, is an historian of national security, the policing of dissent, and governmental transparency. Shapiro’s pathbreaking FOIA work has already led the FBI to declare his MIT dissertation research a threat to national security. Shapiro is a Ph.D. candidate in the Department of Science, Technology, and Society (HASTS) at MIT, as well as a Research Affiliate at the Berkman Klein Center for Internet & Society at Harvard University.

Shapiro is also the co-founder and president of the new transparency organization Operation 45. The Nation has described Operation 45 as “a ray of hope in these dark political times.”

Jason Leopold is an award-winning Senior Investigative Reporter at Buzzfeed News, specializing in counterterrorism and human rights. Leopold has been called a “FOIA Terrorist” by federal employees for his aggressive use of the Freedom of Information Act, which includes successfully suing the FBI to force changes to Bureau FOIA practices.