[New York, NY/ Washington, DC] A lawsuit over a provision in the National Defense Authorization Act (NDAA) was back in a federal appeals court at 10am on February 6, 2013, awaiting decision on an injunction prohibiting indefinite detention of civilians without charge or trial.  Today news broke that the Supreme Court would not grant a seperate application by the plaintiffs to vacate the stay on Judge Katherine Forrest’s injunction baring the use of indefinite detention under § 1021(b)(2) of the NDAA.  You can read the supreme court transcript HERE (#12A600).

A group of academics, journalists, and activists filed the successful suit last fall over § 1021(b)(2) of the NDAA alleging that the provision suspended due process rights and threatened first amendment protections.  On September 15, 2012 the plaintiffs were awarded a permanent injunction by Judge Katherine Forrest of the Southern District of New York.  Their victory is being appealed by the Obama administration.   Both sides, as well as lawyers for Senators McCain, Ayotte, and Graham, presented oral arguments to the 2nd Circuit Court of Appeals during the February 6th proceeding.

For the reader who is unfamiliar with legalese, or the trajectory of cases like this, there are two concrete points to take away from what has transpired thus far…

The first point is that Judge Forrest’s ruling was not only historic in that she stood up to the same administration that appointed her, but also because it underscored the fact that these plaintiffs each had standing in the case. This means that it was Judge Forrest’s interpretation that each plaintiff, could be at risk for indefinite detention under § 1021(b)(2) of the NDAA, for their otherwise constitutionally protected work as journalists or activists.

The second point was revealed in the 24 hours after Judge Forrest issued her permanent injunction on September 15th, 2012, when the Obama Administration filed a request for an “emergency stay” of her ruling.  While, an appeal of the ruling was expected from the Obama Administration, no one could have expected the speed and ferocity in which they would file their request, especially with only a little over a month until election day.  This led many to suppose that this administration has either inherited detainees who were imprisoned indefinitely using powers similar to those outlined in § 1021(b)(2) or are regularly using these powers themselves, and thus would be in contempt of court if Judge Forrest’s ruling stood.

Chris Hedges highlighted this supposition in his remarks made during the press conference outside the 2/6 hearing in the Second Circuit,  “…the Obama Administration didn’t just appeal, they demanded an emergency stay,” said Hedges,  “which means they wanted the Judge to put this law back into effect, immediately, until the second circuit could hear the appeal.  Judge Forrest, to her credit, refused, and so the Obama Administration went to the Second Circuit,  and demanded an emergency stay, which the second circuit gave them.  Now the supposition can only be made …that they responded this aggressively because they are already using the law.  If they are holding American Citizens and denying them due process, as I suspect they are, probably with US-Pakastani Dual-Nationals in places like Bagram and that injunction was allowed to stand they would be in contempt of court.” 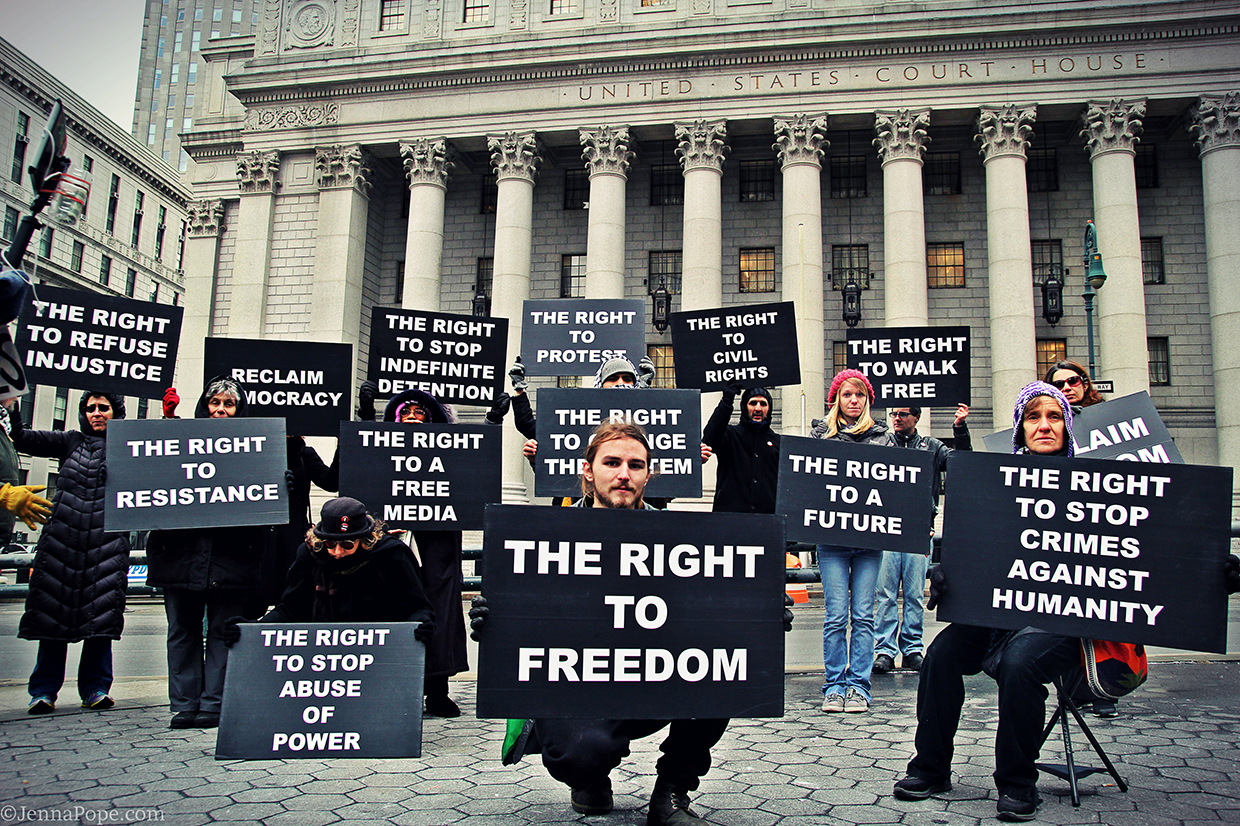 This supposition is the most frightening part of the narrative surrounding § 1021(b)(2) as it infers that, for quite some time, American authorities were using detention powers that they never had, and only now are attempting to create a retroactive mandate that would make legal their previously illegal detentions.  This revelation (if properly articulated) may be the integral component to finally forcing the mainstream media to cover this complicated and previously politically taboo issue.

On February 4th the White Papers detailing the United States’ targeted killing policies were leaked to Michael Isikoff at NBC News subsequently forcing many of the mainstream outlets to question the bloat of executive powers post 9/11.  This provided a unique opportunity to insert talking points into this discourse about similar misuse of executive and military powers under § 1021(b)(2) of the NDAA.

While the controversy over expanded powers like those granted in § 1021(b)(2) should occupy international headlines, to date we have not seen this issue widely covered.  Some can speculate that proper coverage of the NDAA was hindered by the 2012 Presidential Election, while others attribute a lack of proper coverage to conspiratorial misrepresentations of the NDAA by pundits like Alex Jones, either way the deeply troubling elements of § 1021(b)(2) of the NDAA did not generate the media coverage and public outcry it deserved, but this may be changing…

The “Flood the Court” event called for by activists on February 6th could not be ignored as it drew hundreds of people to the Second Circuit in protest of § 1021.  Similarly it saw a dozens of media outlets in attendance beyond that of the alternative outlets and citizen journalists who have tirelessly dedicated themselves to this story.  All of the press generated from the event was positive and in favor of the plaintiff’s arguments, including some major and mainstream hits in The New York Times, The Guardian, Reuters, and The New York Law Journal.  You can read a semi-complete roundup of the laundry list of related media coverage HERE.

In the battle against the NDAA there are three fights, one is the lawyers fight in the courtroom, the other is a battle of public perception to the issue, and the third is a battle in the streets to salvage what little of our democracy is left in hopes that one day we may be able to restore it. We here at Sparrow have been working around-the-clock to get these courageous plaintiffs the press coverage they deserve.  We hope that we can create a public outcry so deafening the Supreme Court will be forced to rule in favor of the plaintiffs and favorably on the issue of indefinite detention.