Washington, DC — In response to reports that the President Trump is planning to issue an executive order targeting the US conflict minerals provision, also known as Section 1502 of Dodd-Frank, Carly Oboth Policy Adviser at Global Witness said:

“Any executive action suspending the US conflict minerals rule would be a gift to predatory armed groups seeking to profit from Congo’s minerals as well as a gift to companies wanting to do business with the criminal and the corrupt.

“This law helps stop US companies funding conflict and human rights abuses in the Democratic Republic of Congo and surrounding countries. Suspending it will benefit secretive and corrupt business practices. Responsible business practices are starting to spread in eastern Congo.  This action could reverse that progress.

“It is an abuse of power that the Trump Administration is claiming that the law should be suspended through a national security exemption intended for emergency purposes.  Suspending this provision could actually undermine US national security.”

The conflict minerals law, known as Section 1502 of the Dodd Frank Act, aims to help stop mineral trading fuelling conflict in Central Africa by requiring companies to check whether they are funding conflict or human rights abuses through their purchases of minerals, including tin, tantalum, tungsten and gold. These minerals are crucial parts of many products manufactured and sold in the US, from jewelry and airplanes to laptops and mobile phones.

For over a decade, Global Witness has exposed the role of minerals in fuelling conflict and human rights abuses in eastern Congo and played a leading role in securing passage of the conflict minerals provision.

Washington, DC — Today’s decision by the Republican-led U.S. Senate to overturn a rule designed to stop oil companies striking corrupt deals with foreign governments is a grave threat to U.S. national security and an astonishing gift to big oil, said Global Witness. The news comes just two days after Rex Tillerson, a longstanding opponent of the law while CEO of ExxonMobil, was confirmed as Secretary of State, and the day after the U.S. eased sanctions on Russia.

The oil industry is the most corrupt on the planet. Alongside a broader anti-regulatory push and President Trump’s failure to address his conflicts of interest, this vote to roll back efforts to bring oil deals into the open is another sign of the rapid erosion of U.S. democracy in favor of big business.

The law, known as the Cardin-Lugar transparency provision, requires U.S.-listed extractive companies like Exxon, Chevron and several Chinese oil majors to publish details of the hundreds of billions of dollars they pay to governments across the world in return for rights to natural resources. Bringing shady oil deals to light should help ensure these vast public revenues benefit all instead of lining the pockets of corrupt elites. However, this week, Congress voted to rescind the implementing regulation by the U.S. Securities and Exchange Commission, with the House of Representatives voting on Wednesday and the Senate voting earlier today.

“As Exxon CEO, Rex Tillerson did everything in his power to gut this law, because it doesn’t suit big oil’s corrupt business model. Now he’s Secretary of State Congress has immediately sanctioned corruption by green lighting secret deals between oil companies and despots. These deals deprive some of the world’s poorest people of oil wealth that is rightfully theirs. Given the President’s massive conflicts of interest and his administration’s broad attacks on regulation, it appears our institutions are increasingly being abused to further the business interests of a powerful few. This is how corrupt dictatorships start,” said Corinna Gilfillan, Head of U.S. Office of Global Witness.

This move sets the U.S. in opposition to a broader global trend toward greater transparency and accountability in how oil, gas and mining revenues are managed. Thirty other major economies around the world, including the UK, Canada, Norway and all 27 members of the European Union – have laws requiring their oil, gas and mining companies to disclose their payments to governments. Dozens of major European and Russian oil companies have already published their payments to governments. Claims made by the oil lobby that greater transparency will harm U.S. oil companies’ competitiveness has proven untrue.

Global Witness notes with concern the complete fabrication of facts by the Republican leadership in their presentations about the Cardin-Lugar transparency provision.  They have relied on the American Petroleum Institute’s “facts,” which have been discredited over the past six years in multiple fora, while being totally unwilling to hear an alternative view. This is evidenced by their absence during the actual debate, not to mention the fact that many in the leadership who have pushed this resolution receive vast sums from the oil and gas industry. In the absence of a better explanation, it is difficult not to conclude that big oil has just had its lackeys liberate them to be corrupt.

“The U.S. has thrown away its global leadership on tackling corruption. Oil, gas and mining companies from other countries have already disclosed over $150 billion in payments under similar rules, meaning citizens can begin to hold their governments to account. If they can do it, you have to ask – what have the U.S. companies got to hide?” said Gilfillan. The law was finally implemented in 2016 after being passed in 2010 as part of the Dodd Frank reform act. It was implemented following a broad campaign from civil society groups, investors and community leaders all over the world.

Prior to the vote, Bishop Cantu, Chairman of the Committee on International Justice and Peace at the United States Conference of Catholic Bishops said, “Transparency in extractive industry payments to governments is important to us as leaders of the Catholic community of faith and institutions that are investors and consumers. We believe these principles, policies, and rules can help protect the lives, dignity and rights of some of the poorest and most vulnerable people on earth. The rules have moral and human consequences as well as economic and political impact.”

The oil industry is the most corrupt on the planet, according to the OECD. Yet today the House of Representatives voted through a resolution to void the rule implementing the bipartisan Cardin-Lugar anti-corruption provision, which requires oil, gas and mining companies to disclose details of the hundreds of billions of dollars they pay to governments across the world in return for rights to natural resources.

“Make no mistake – this vote by the Republican-controlled House works in favor of corruption and against core American democratic values. The law under threat exists to deter U.S. listed oil, gas and mining companies from cutting secretive deals with corrupt regimes, tyrants and dictators all over the world – undoing it threatens our national security,” said Corinna Gilfillan, Head of U.S. Office at Global Witness. 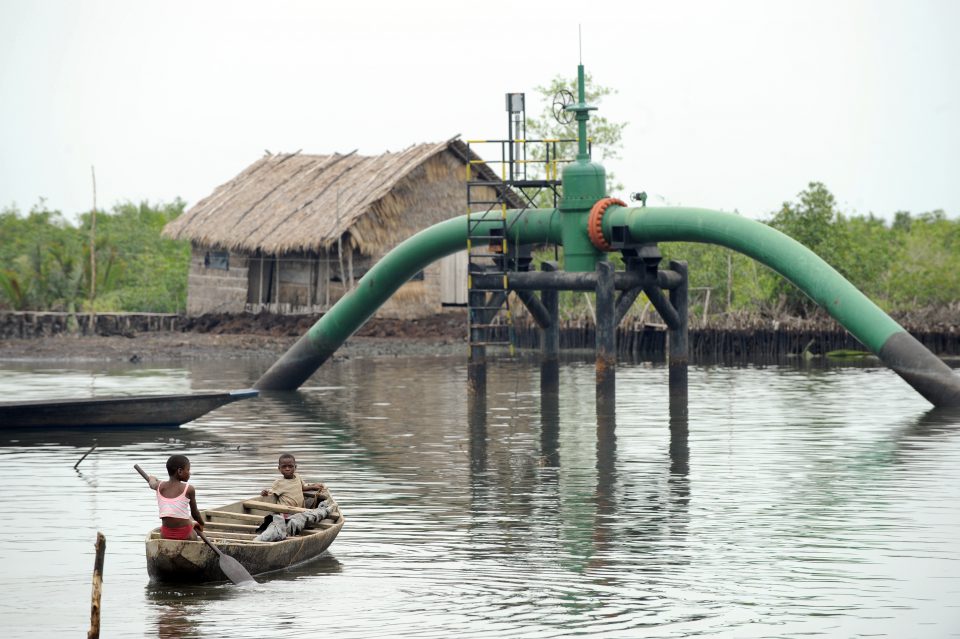 Children sail past an oil pipeline head near their home at Andoni settlement, Bonny waterways in Rivers State in Nigeria. Global Witness recently highlighted how a questionable oil deal between ExxonMobil and the Nigerian government is currently being investigated by Nigerian law enforcement. | Photo: Pius Utomi Ekpei AFP/Getty Images

“Rex Tillerson led efforts to undermine this law as ExxonMobil CEO, while many of the politicians in the House who voted to gut it receive money from the oil companies who have benefited from these secret deals. Now on the same day that the House voted to undo this provision, the Senate has confirmed Tillerson as Secretary of State – we have a pro-bribery House and Trump administration doing the bidding of big oil.”

This comes just days after Nigeria’s anti-corruption law enforcement agency seized a billion dollar oil block from Shell and Eni during a corruption investigation. Had the U.S. anti-corruption rule been in place in 2011, this crooked deal would never have gone through, leaving the companies’ investors and the Nigerian people much better off.  The deal itself deprived Nigeria’s people of a sum worth 80% of its 2015 healthcare budget. Given that the block in question is estimated to hold as much as 9.23 billion barrels in probable reserves, investors face substantial losses from a backroom deal they knew nothing about.

One of the 1st Obama rules Rs aim to roll back makes oil firms disclose $$ they give foreign govts https://t.co/eBwuVleAx4 @StevenMufson

Global Witness recently highlighted how a questionable oil deal between ExxonMobil and the Nigerian government is currently being investigated by Nigerian law enforcement.

Don’t look now, but Congress is about to repeal an anti-corruption rule for oil & mining. @robbiegramer reports https://t.co/BMnuMQqBpt pic.twitter.com/NmcH2M65o8

The Senate is expected to vote on a similar resolution as early as tomorrow. The news follows President Trump’s signing of executive orders designed to force through the environmentally devastating Keystone XL and Dakota Access pipelines last week.

Washington, DC — The past 24 hours have seen an unprecedented number of gifts to Exxon and the oil industry, said Global Witness today. Yesterday, the Senate Foreign Relations Committee approved former CEO of Exxon, Rex Tillerson, to lead the State Department. Today, it is expected that Republicans in the House of Representatives will introduce a resolution to wipe out an historic oil transparency reform, while President Trump signed executive orders designed to force through the environmentally devastating Keystone XL and Dakota Access pipelines despite years of opposition.

“Just one day after the committee vote in support of former Exxon CEO as next Secretary of State, the oil industry is enjoying an unprecedented free for all,” said Corinna Gilfillan, Head of U.S. Office of Global Witness. “Today, Trump issued executive orders to advance the Dakota and Keystone Pipelines while Republicans are expected to attempt to gut a law designed to curb corruption, despite Trump’s signature campaign promise to root out corruption. Exxon has been trying to rip up this law for years, it’s not a coincidence.”

The resolution would roll back a landmark anti-corruption law, known as the bipartisan Cardin-Lugar anti-corruption provision, which requires oil, gas and mining companies to disclose details of the hundreds of billions of dollars they pay to governments across the world in return for rights to natural resources. The rule is a key part of U.S. efforts to curb the corruption that keeps poor countries poor and threatens U.S. national interests and global security around the world. 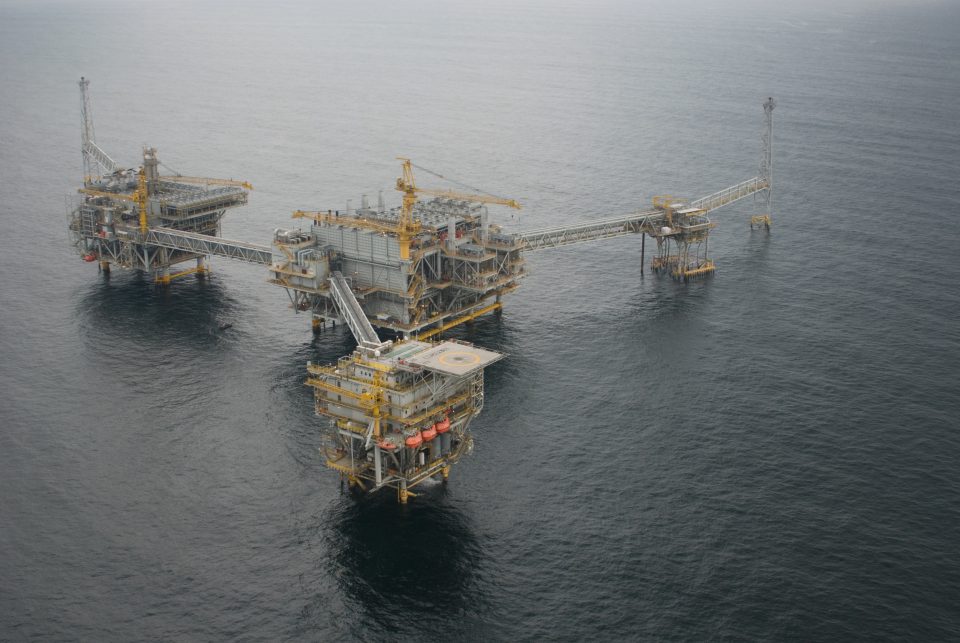 “Given the long-standing egregious record of the oil and gas industry, and now the likely confirmation of the former Exxon CEO as the top U.S. diplomat, it is difficult to not conclude that these pro-corruption moves by the Trump Administration and the Republican-controlled Congress are a sign that not only do they think corruption is perfectly acceptable but that they intend to become pro-active enablers of corruption,” said Simon Taylor, co-founding director of Global Witness.

ExxonMobil is spearheading industry efforts to gut the Cardin-Lugar anti-corruption provision, which would bring much needed transparency to the secret deals that ExxonMobil and other resource companies do with corrupt regimes, fueling instability around the world.

For additional information or to request an interview with a Global Witness spokesperson contact Andy Stepanian at 631.291.3010 or andy@sparrowmedia.net