In a move roundly criticized by journalists and transparency groups, on April 14th, 2017, the Trump administration announced it was abandoning the Obama-era policy of making White House visitor logs open for public inspection. Seeking to restore public access to these crucial records, the Washington, D.C.-based transparency organization Property of the People filed Freedom of Information Act (FOIA) requests with numerous White House offices, and filed suit against some of these offices for failure to comply with the group’s requests.

As a result, Property of the People obtained large portions of these White House visitor logs and calendars. In a publishing and development partnership with ProPublica, a searchable database containing 8,807 entries from these White House visitor logs and calendars was created for journalists and concerned citizens. The release contains entries spanning January 20, 2017 to September 6, 2017, which represent a large portion of the meetings taken by the White House’s executive Office of Management and Budget (OMB), Council on Environmental Quality (CEQ), Office of National Drug Control Policy (ONDCP), Office of Science and Technology Policy (OSTP), and the Office of the United States Trade Representative (USTR). 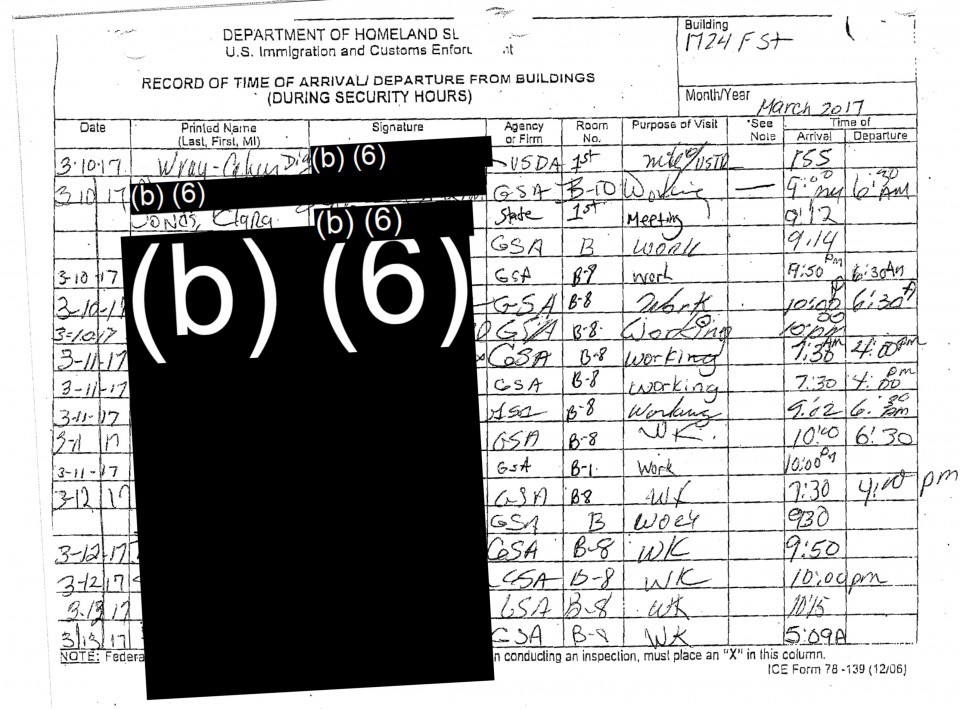 Just one of hundreds of pages of hand written visitors logs Property of the People obtained from the executive office of the United States Trade Representative (USTR). ProPublica worked to digitize these records and thousands of others to forensically reconstruct the bulk of Trump’s White House visitor logs. A searchable database of the records is available via ProPublica HERE.

Within these records are revelations both small and large.  Today ProPublica leads with reporting based on the released documents that upon arrival at OMB director Mick Mulvaney’s calendar quickly became a who’s who black book of corporate and conservative interests — a selection includes casino magnate and friend of the president, Steve Wynn; representatives of the ultra-conservative Heritage Foundation; Wall Street and health CEOs; Koch Industries lobbyists; a Russian cryptocurrency evangelist; and a prominent member of the right wing Catholic organization Opus Dei. 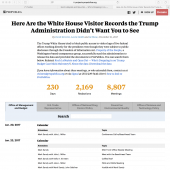 Thanks to the tireless efforts of ProPublica, over 8,807 White House Complex meeting records are now available for public inspection. The searchable database of White House records is available via ProPublica’s website HERE.

Of their joint effort with ProPublica, Property of the People co-founder Ryan Shapiro says, “The ProPublica reporting based on our documents unmistakably reveals that OMB maintains an open door policy for those representing many of the most conservative interests in the country. Imagine what we might learn if the White House stopped hiding and actually made its full logs available. The democratic process cannot meaningfully function without an informed citizenry, and such a citizenry is impossible without broad public access to information about the operations of government. Trump’s secrecy surrounding White House visitor logs denies the public information it needs to hold this administration accountable.”

Property of the People Chair Sarahjane Blum adds, “obtaining these documents is an important step towards transparency, but the White House is still improperly withholding many names from these logs. Property of the People continues to vigorously seek release of these names through our ongoing FOIA litigation.”

Moving forward, new White House visitor logs and calendar entries will be added to the database as they are obtained by Property of the People via the organization’s continuing Freedom of Information Act requests and lawsuits.

Ryan Shapiro is a PhD candidate at MIT and co-founder of Property of the People. Politico has called Shapiro “a FOIA guru at the Massachusetts Institute of Technology.” Shapiro is an historian of national security, the policing of dissent, and governmental transparency. Shapiro’s pathbreaking FOIA work has already led the FBI to declare his MIT dissertation research a threat to national security. Shapiro is on twitter @_rshapiro.