[New York, NY] Join Strike Debt for an updated version of an old classic, the telethon, to launch The Rolling Jubilee, a campaign that buys debt for pennies on the dollar and then does away with it. Instead of collecting the debt, we will abolish it and help free the debtors!  You can buy tickets to this historic event HERE or watch the livestream on November 15, 2012 HERE. 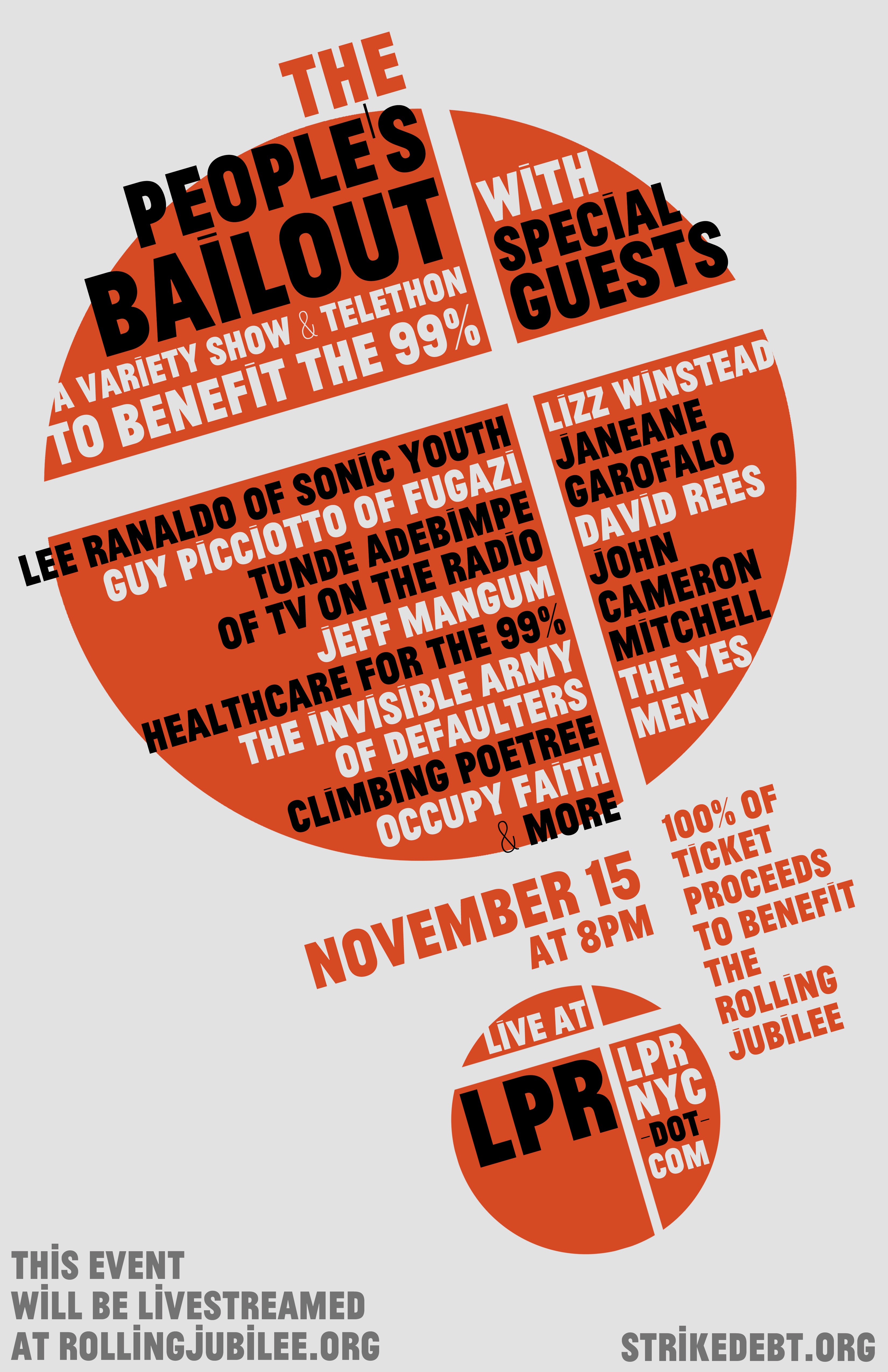 A bailout of the people by the people. We buy debt for pennies on the dollar, but instead of collecting it, we abolish it. We cannot buy specific individuals’ debt – instead, we help liberate debtors at random through a campaign of mutual support, good will, and collective refusal.” say’s Strike Debt on their website describing their refreshingly empowering, and potentially viral, new pay-it-forward effort to abolish debt appropriately named the “Rolling Jubilee“

“It’s finally time to tell you about our exciting new project, “The Rolling Jubilee.” The basic premise is simple: people shouldn’t have to go into debt for an education, because they need medical care, or because they have to put food on the table during hard times.

No politician is going to fix this…

The Rolling Jubilee is a bailout of the people by the people – we buy defaulted debt for pennies on the dollar, but instead of collecting it, we abolish it. For once the math is on our side: a $25 abolishes approximately $500 of debt. The more money we raise, the more debt we can abolish. Donations can be made online at rollingjubilee.org beginning around November 15.

This campaign will launch on November 15th with THE PEOPLE’S BAILOUT, a telethon and variety show at Le Poisson Rouge in New York City. There will be music, comedy, education, magic and more. Confirmed guests include: comedian Janeane Garofalo, Daily Show co-creator Lizz Winstead, actor/director John Cameron Mitchell (‘Hedwig and the Angry Inch’), comedian Hari Kondabolu, David Rees (‘Get Your War On’), Jeff Mangum of Neutral Milk Hotel, Lee Ranaldo of Sonic Youth, Guy Picciotto of Fugazi, Tunde Adebimpe of TV on the Radio, and more. (a high resolution poster for the event is available HERE or by double-clicking the image above)

Tickets for the show went on sale on Friday, you can purchase yours at http://www.lepoissonrouge.com/lpr_events/peoples-bailout/ but act fast because we expect that this event will quickly sell out!

HOW YOU CAN HELP

We’re hoping you can help us spread the message via social media. Let’s get the word out far and wide. Here’s how…

1) Forward this message to friends and family.

On November 15th, we’re organizing a big coordinated push to promote the #PeoplesBailout on social media.  Sign up for email updates at rollingjubilee.org then watch your inbox and invite your friends to sign up as well!”

The People’s Bailout: A Variety Show & Telethon to Benefit the 99%