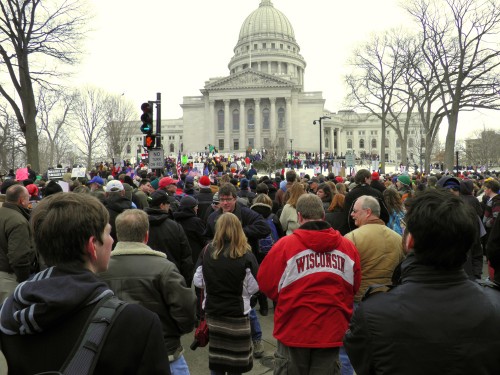 Hubris is the gift to the righteous; it ensures that the wicked will meet the sword of justice. The machinations of Scott Walker and his vampiric sponsors, the Koch brothers, in recent weeks, in Wisconsin, are a seminal event. This is momentous: posterity could remember this as the moment the working class shed the yoke of serfdom and accommodation and finally rejected plutocratic dicta that ensure our degradation, enslavement and ultimate extinction. The ignoble Governor Walker’s lies about “balancing budgets” were laid bare by a Yippie-style prank call in which he revealed that his goal is essentially to establish a precedent that would begin a domino effect leading to the dissolution of the organized labor movement.

For too long, the working class has acquiesced to the capitalist class, in supine servitude, so it was a great surprise that the masses arose and demanded that the proposed bill not be passed.

While the events that continue to transpire in Wisconsin are encouraging, it remains to be seen what will eventually come of them. The people of Wisconsin are undaunted and their courage and resolve seems to be spreading. Similar events are occurring in Indiana and are expected in every state where hateful, anti-worker legislation is being proposed. The capitalists and their marionettes in government may have gone too far, this time. Will this be our Cairo? Our truly grass-roots movement from below, rather than the “astroturf networking,” funded by corporations, which has passed for peoples’ movements, in recent years. Will Americans finally awaken and realize that the red herrings of race, religion and every other falsely divisive distraction are just that? Distractions. Will we finally understand that it is about class? Because, it is always about class. If this does turn out to be the case, as I hope it does, then the capitalist class had better take care: we are 95%; they are the degraded product of profligacy and entitlement. 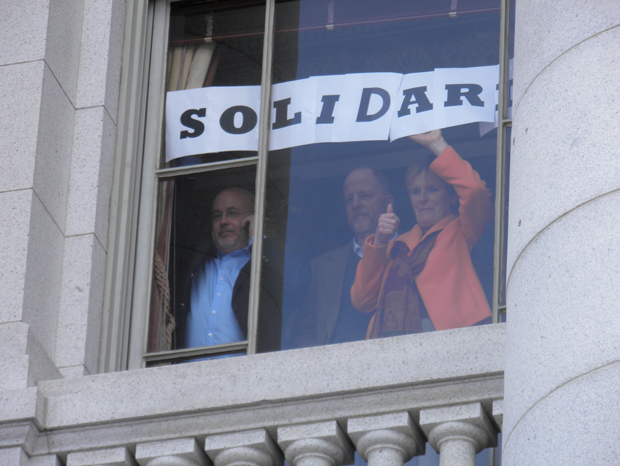 It awaits to be seen whether this is our Cairo, or if our class solidarity is splintered by agents provocateur, simple apathy or the stupefying and seemingly self-loathing practices of workers who vote for politicians who enact programs designed to harm working and poor people. I hope it is the former.

Arthur Smilios is an unapologetic anti-capitalist, musician rabble rouser.   Arthur was the co-founder of the seminal New York punk band the Gorilla Biscuits. Since his days of performing “Cats & Dogs” (a song that encouraged thousands to adopt a vegetarian lifestyle)  Arthur has strived to braid his art with his passion for social justice.  The Sparrow Project has invited Arthur to continue to sound off on the issues he holds most dear through their blog on https://sparrowmedia.net .  Arthur’s articles are written exclusively in his own voice, and may not reflect the views of The Sparrow Project.

Pakistan: in the Wake Of Cairo, Tunisia, Bombings & Flooding

so much of this suffering is preventable, if you had a government who cared or an education system that empowered people to fight back against government corruption. It is this kind of suffering, corruption and governmental neglect that leaves the population vulnerable to any number of forces, particularly those that are seen as the alternative saviors to the poor who have been so neglected by their government.
min read 0
Top